About the Hepatitis C Dashboard

Hepatitis C (HCV) is a major public health problem causing substantial illness and death, including cirrhosis and liver cancer. Nationally, three out of four people living with HCV are persons born between 1945 and 1965, but most new infections occur because of injection drug use. In recent years, there has been an increase in HCV among young people who inject drugs (PWID). Many people with HCV are unaware they are infected. Yet, current highly effective direct acting antiviral therapies cure this disease with minimal side effects, making it possible to eliminate HCV.

In 2018, the Governor’s office announced its commitment to eliminate HCV as a public health problem in New York State (NYS) by increasing access to medication, expanding comprehensive HCV programs, and enhancing HCV treatment services for those at risk. Following this announcement, a 28-member Hepatitis C Elimination Task Force was established to provide input to the NYS Department of Health (DOH) on the Hepatitis C Elimination plan.

In November 2021, NYS released the HCV Elimination Plan, detailing ambitious targets and metrics. Implementation of the plan will require the work of many organizations and individuals, including state and local agencies, health care and community-based organizations, public and private partnerships, and persons impacted by HCV. The plan’s recommendations are intended to evolve with new research, care models, and policy advances, and as the NYS surveillance system is enhanced, key targets may be revised to reflect improved accuracy of the data.

Plan recommendations include establishing a Dashboard to “track and report on HCV elimination plan progress.” By creating a public facing web-based system to make timely statewide, regional and county-level HCV data available to all stakeholders, including people infected and affected by HCV, the HCV Dashboard will convey progress towards achieving the goals and targets of the initiative.

To learn more about the HCV elimination targets and primary metrics, visit the Targets and Metrics page. 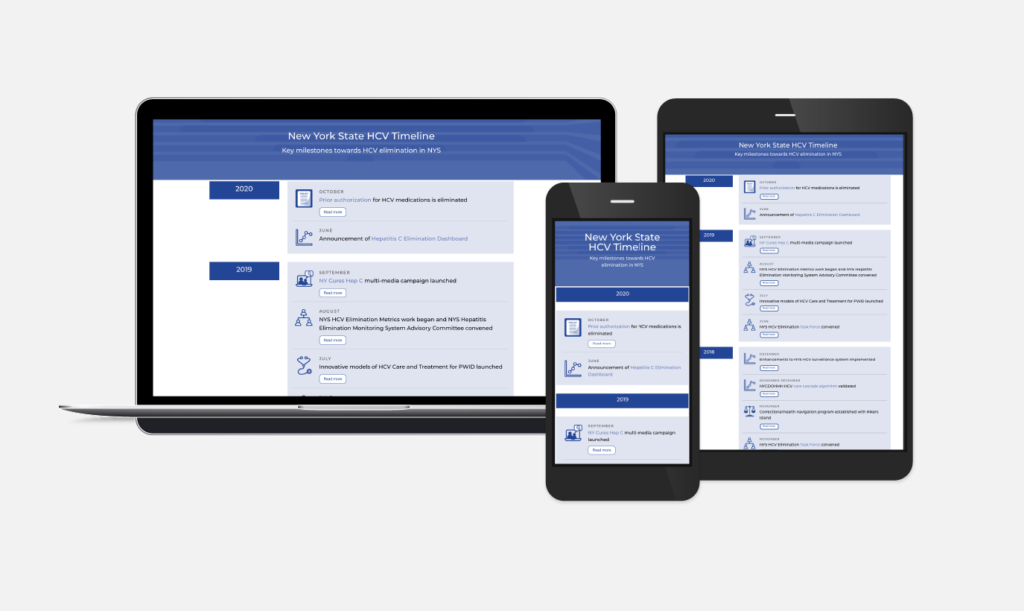 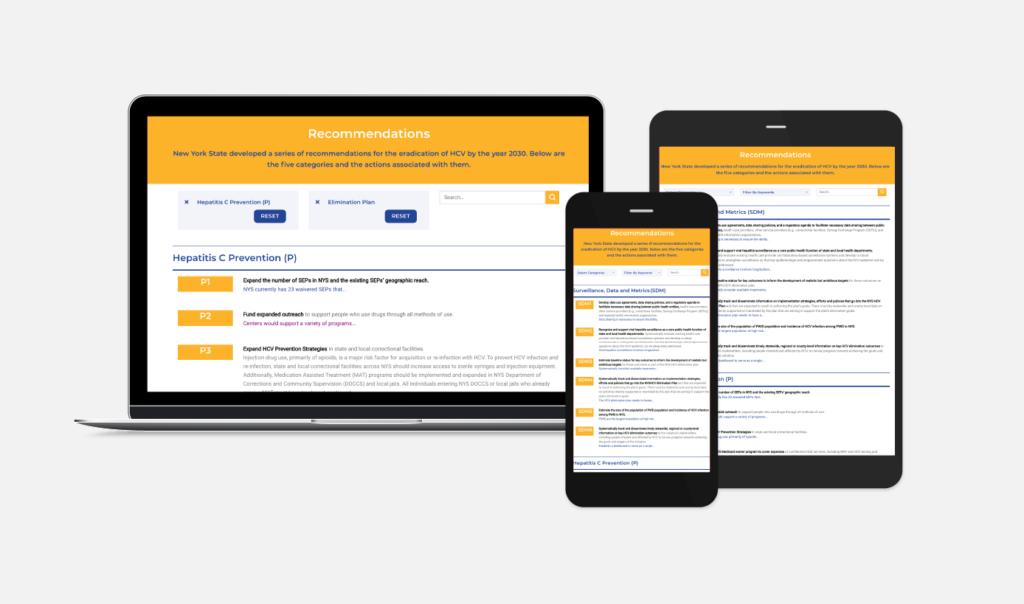 These recommendations are organized into the following five categories:

HCV Testing and Linkage to Care

The HCV Dashboard team is based at the Institute for Implementation Science in Population Health, CUNY Graduate School of Public Health and Health Policy. We work closely with leadership and staff at the New York State Department of Health AIDS Institute and Division of Epidemiology, the University at Albany – School of Public Health and the New York City Department of Health and Mental Hygiene on the planning, design, maintenance and evolution of the HCV Dashboard. Our diverse team includes individuals with extensive domestic and international experience working in the ﬁelds of epidemiology, dashboard systems, public health surveillance, epidemiologic data analysis and dissemination, geographic information systems, and public health informatics.

Director of Development and Informatics